Pizza on a Snow Day! {Gluten-free}

on February 08, 2013
My husband is a genius! ;) It's true, he does come up with some pretty good ideas from time to time. Actually, he gave me a small suggestion that rendered an excellent result! Watch the video below for a reminder and then scroll* down to see the small change that made this already DELICIOUS recipe even better! 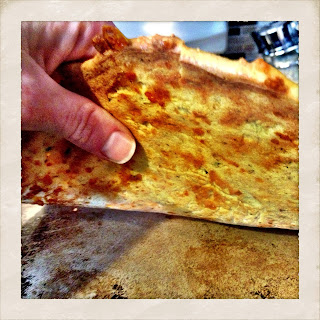 If you ask anyone who suffers with Celiac Disease or a Gluten Intolerance what food they miss most, chances are, most of them will say, "A good Pizza!" It's one of those comfort foods that you can order in at a moment's notice and it's a hit with everyone. Of course, if you are one of the 1 in 250-300 North Americans who must follow a gluten-free lifestyle, it is anything but comforting...in fact, once you know you can't tolerate gluten you steer clear of it at all cost! So obviously, at first you feel very deprived of something that you used to eat without thought or worry and it can be very discouraging. It's encouraging to see that more and more restaurants are starting to offer gluten-free alternatives including Boston Pizza and more recently, Chuck E. Cheeses, but more often than not, those alternatives are more expensive than the normal menu items.

Well I want to assure you, there is hope! Because I am going to share with you, a delicious Pizza Crust/Breadstick recipe that everyone will love, whether or not they are avoiding gluten-filled foods. Read on after the video for a more in-depth look at our personal journey to becoming a gluten-free family, but for now, let's get to a recipe that has quickly become one of my husband's favorites! And stay tuned until the end of the video for an important announcement!

For Pizza:
Top with sauce (homemade recipe to come!) and desired toppings.*
Place back in oven for about 12 minutes. You may also find it helpful to place it under the broiler for a few minutes at the end to get the nice bubbly cheese on top.
Slice it up and watch the smiles appear! 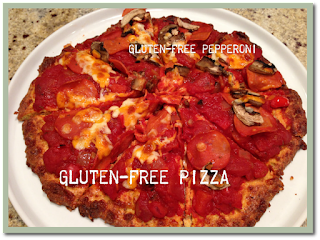 *Note about toppings: Be very careful when purchasing pepperoni. Most of them contain wheat flours and/or starches. I used Butterball Turkey Pepperoni on this pizza.

I admit it, I was one of those people that, for a long time, thought the whole "gluten-free thing" was a fad...something that people did just to feel better or lose weight. It was touted by celebrities and loads of people were jumping on the bandwagon. I did my own research on gluten and had come to the conclusion that unless I personally had an intolerance, it was ok to ingest...although this view would later drastically change! Kirk wanted to try it at one point to see if it would help relieve some of his symptoms, but upon further research I realized just how many things contained gluten, I got extremely overwhelmed with the whole idea and he didn't stick to it for more than a day. So, we decided against it...it was just too inconvenient. But you know what's really inconvenient? Feeling absolutely horrible on a daily basis!

I didn't start looking into it again until I was diagnosed with extreme anemia about a year and a half ago. I had been very active and eating nutritiously and yet I was found to be iron-deficient. I had been diagnosed with Raynaud's Phenomenon prior to this and had been referred to a Rheumatologist. By the time I saw her I had a variety of symptoms that I couldn't explain...I could no longer workout at the same rate I had before, I would get winded at the drop of a hat and it was not uncommon for me to go to bed in the middle of the afternoon and not wake up till the following morning. I had swelling in my extremities when they weren't numb and heartburn like you wouldn't believe. The doctor ordered blood tests and within a week I had a call from her office informing me that my hemoglobin levels were extremely low and if I felt any worse I should go to Emergency for a blood transfusion! Well, that explained the extreme fatigue, but didn't explain why I was suddenly so deficient.

At that point I was referred to a Gastrointestinal doctor and he immediately began testing me for Celiac Disease. Now, mind you, I was not a huge bread eater to begin with and had been making most of my food from scratch at this point...so chances are I wasn't ingesting a large amount of gluten. One of the most important things to do if you are planning on being tested for celiac is to continue on a diet that fully contains gluten. I most definitely was not and therefore any testing done would most likely be tainted. Well, sure enough, I had all the blood tests and scopes and was told that "everything is normal." Well, if everything is normal then why am I not absorbing iron??? I was told to go on iron pills and sent on my way.

Upon further blood tests (after being on iron pills for a few months), my hemoglobin & iron levels were back where they should be, but I was still tired a lot of the time...plus my Raynaud's symptoms were off the charts! I couldn't go outside with the temperature below 65 degrees (that's 18 degrees for my Canadian readers) :-) without having an attack, even though I was always wearing my thick mitts and boots. I was extremely frustrated...I got the impression that now that my iron levels were up the doctors felt their job was done. While I appreciated the expertise of these doctors, I was not satisfied with the results. Therefore, I continued to dig even deeper...

I found numerous resources that truly enlightened me! When most of us are introduced to Celiac Disease we are usually under the impression that the only symptoms are gastrointestinal, but that is not the whole story at all. There can be over 300 symptoms and signs of a gluten intolerance! Wow! Including, and certainly not limited to, autoimmune disorders like Raynaud's, neurological issues (which is what Kirk deals with on a daily basis) and skin disorders. There is an unbelievable list of issues that can come about due to an intolerance to gluten. Due to this research and even though I was given a clean bill of health, Kirk and I have made the decision to cut out all gluten-filled foods to see if it makes a difference. We both have already experienced major changes in how we feel! My Raynaud's symptoms have reduced considerably without medication. Kirk and I both have noticed less bloating and fatigue. And while we still haven't seen a significant change in his neurological symptoms (we're still in the early stages here), he feels better overall. Now that we have found so many delicious alternatives to what we used to eat, like this pizza crust, it makes it so much easier to stick to this new lifestyle.

I want to encourage you to be your own advocate. We know first-hand what it is like to suffer with symptoms for years, have numerous tests with "normal" results and continue to go through daily life with no diagnosis. Find a health care professional that will really listen to you and work with you as you try to get well. There are so many diseases/syndromes/disorders that can be at least partially treated by making dietary changes so if nothing else has worked for you, I encourage you to begin this journey. I hope these recipes and hints can help you on your way! Kirk and I believe that we go through life stages for a reason and that one of those reasons for us, is so we can encourage others who may be dealing with similar issues.

We will continue to update you on our progress and encourage you to contact us as well with your stories! The gluten-free lifestyle is not a fad, it is a serious way of life for many, many people and that's why I am so passionate about what I do!

While you're over at YouTube watching the video, please make sure to rate, comment and subscribe so you don't miss anything! And be sure to spread the word on Facebook, Twitter, Pinterest & Instagram. You can also subscribe to this blog so you will be alerted to anything new. Thanks again for trying the recipes and reporting back to me your success stories and alternative methods. I look forward to hearing from you! 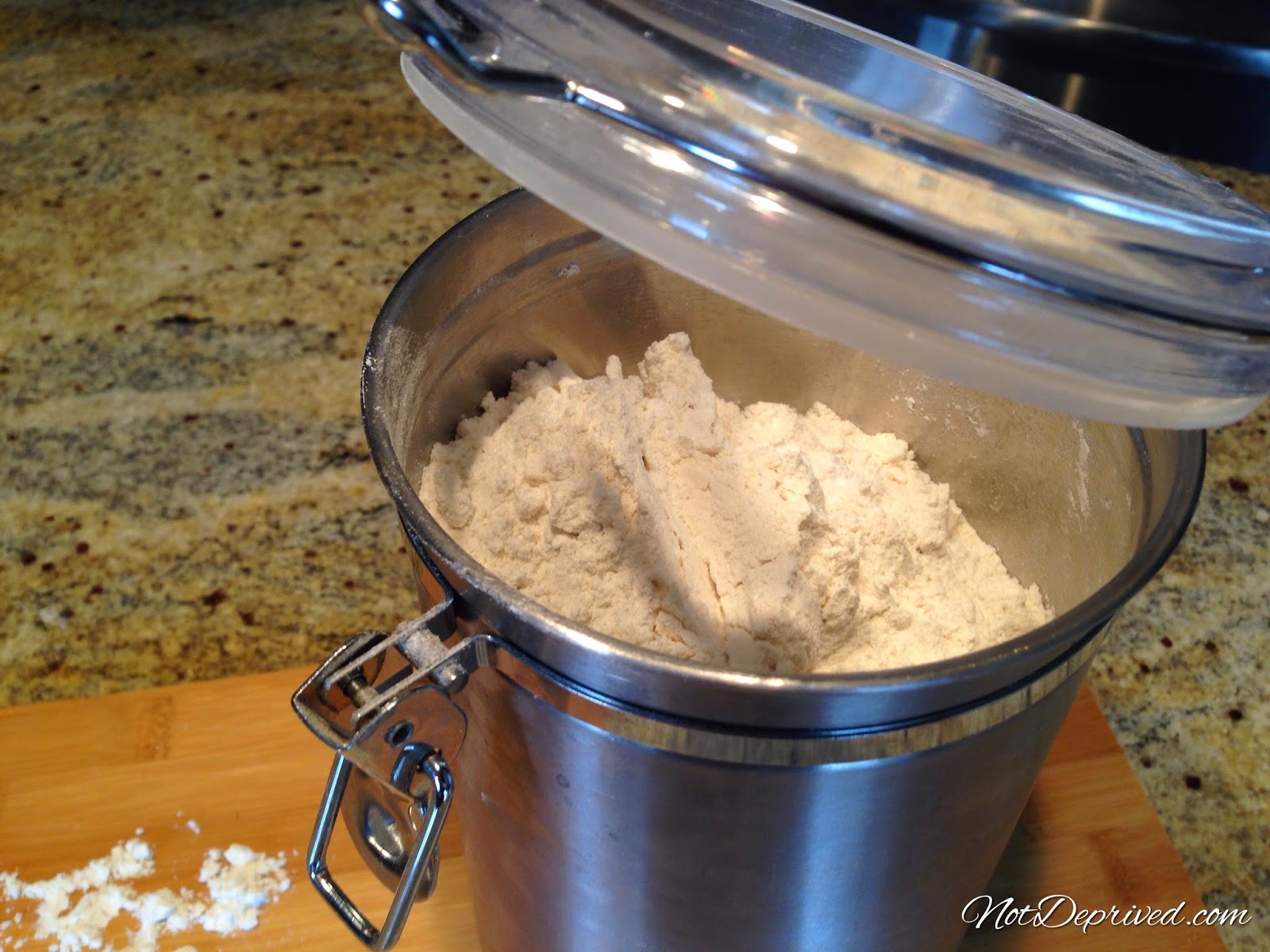 T ime for another recipe! This one is going to be one of your most versatile and well-used in your arsenal. I understand that at first, the thought of converting a recipe to gluten-free can be overwhelming. I know that feeling all too well! Flours that don't contain gluten behave and look very different and therefore a little research and trial and error is needed. I have tried many different mixes and I've landed on one that I use for pretty much everything and now I want to share it with you! W hy do I choose to make my own mixture rather than just purchasing a ready-made mix from the store? Two reasons: 1. Pretty much any gluten-free mixture you will find in the store contains xanthan gum and my body does not approve of this. Just like gluten, xanthan gum is found in many more packaged foods than I could ever imagine. And it is especially found in gluten-free packaged foods due to the fact that it is a good thickener and binder. My body reacts badly to large quanti

I am forever adjusting my recipes. Yes, there are some that I don't mess with because they are just perfect the way they are, but sometimes I will come across something that makes me rethink an ingredient or the amount of an ingredient. Usually it's because I want to reduce the calorie count even more, reduce the sugar or because I have a particular craving. This time, it was all of the above... J ust this past Valentines Day I posted a video with some delicious chocolate treats. These are tried and true and never disappoint! Well, I started messing with them today because I felt like a chocolate and peanut butter fix and the result was so wonderful that I had to share immediately! I adjusted the ingredients for the fudge just a smidge (see ingredients list below)  to lower the calories and then got the idea to add some peanut butter to the mix... THIS was the delicious result: C hocolate and peanut butter! Most would agree this is a pairing made in heaven and tr

W hen you choose to start eating in a more healthful way, the keys are planning and preparation . Grocery shopping can be overwhelming at first as you become conscious of the ingredient labels while still trying to find the best deals on food that can be a little more expensive. But stick with it! Before long you'll be able to plan, prepare and keep to your budget like a pro! I've said it before...it takes time, but it is time well spent when you can be confident that your family is being nourished in the best possible way. I want to encourage you to start simple with one substitution ingredient, even if it's just replacing some sugar with unsweetened applesauce. I didn't get to where I am overnight and you won't either, but don't get discouraged. It's like with any life change...once you realize what you can do, the possibilities are endless and I guarantee that if you keep at it you will discover wonderful things and you  WILL NOT  feel deprived! T h